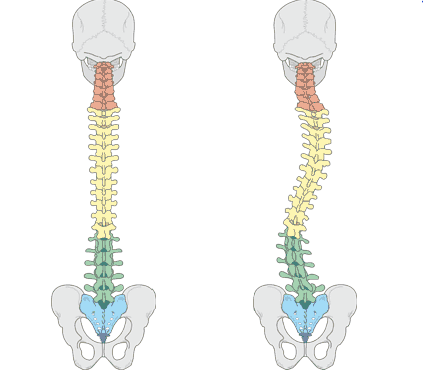 My quest began, as the juiciest ones often do, with a question.

When working toward balance with someone with scoliosis, which side is actually the weaker side? I’ve been studying my own scoliosis for two years now, since I took a “Yoga For Scoliosis” yoga teacher training and found out that my back is curvy. On this question of muscle strength in scoliosis, the jury seemed to be out.

Some systems suggested one strengthen the concave (the inward curving or sunken side) side, theorizing that the muscles on this side are “pulling” the vertebra together while pushing it apart on the convex side (where you often see the hump of expanded ribs or rotated vertebrae). Other systems recommend strengthening the convex (expanded) side, in order to train the musculature to push the spine back toward center and pull the expanded side closer to the midline. So which is it?

I researched medical studies (most of which involve comparing different kinds of braces and, worse still, different types of surgeries) and finally came across one that seems to zoom in on this very issue. The study involves comparing samples of biopsies of paraspinal muscles obtained during surgery from 14 females with scoliosis against a control group of nine females without scoliosis volunteers. The results fascinate me. But first, a physiology detour.

Slow-twitch muscles are postural: they’re working all the time to keep us upright. Slow-twitch muscle fibers generally belong to the muscles closest to the spine; those deepest, most internal ones. They form an architectural support structure for standing tall against gravity. Slow-twitch muscles don’t pack a lot of punch, that isn’t their job, but they do put in long hours – they’re slow and steady like a marathon runner. Engaging slow-twitch muscle fibers doesn’t involve a lot of external movement – it is a more subtle and internal reorganization. And they aren’t meant to engage at 100% full-on capacity: when functioning properly, postural muscles are only engaging at around 15% to 30% effort.

Fast-twitch muscle fibers on the other hand belong to the bigger muscles whose actions move our limbs: the trapezius and rhomboids, biceps and triceps. These are the showier muscles of movement. And they can bear a lot of weight – but they aren’t meant to do so for hours on end in the manner of the slow-twitch fibers. They’re the sprinters of muscle types. They fatigue quickly and build up lactic acid easily. So now, back to the study.

Researchers found significant differences in paraspinal muscles of the girls with scoliosis compared to the control group. Paraspinal muscles run right along the spine – so these should be primarily made up of slow-twitch fibers. Several interesting differences:

Muscular imbalances abound in scoliosis: mine is an S-curve: left-lumbar/right thoracic. I find the left psoas tends to be over-working and over-developed compared to a sleeping and under-utilized right psoas. The left hamstring is tighter while the left quadriceps is also underdeveloped. The left triceps is asleep on the job. It’s challenging to find ways to derotate one curve without throwing the other out of whack, but it can be done. Slow, gentle, persistent work is crucial. We are practicing to develop marathon muscles, not sprinters.

Every practice should be done with an eye toward holding at 20 to 30% effort over a longer period rather than full strength over a short amount of time. The mindful effort and slow pace of a yoga practice make it an ideal form for working with scoliosis. If you have scoliosis consult with your physician before beginning a new exercise routine.

Consider joining Leilani McGonagle and me during our first annual “Yogi Bear Yoga: Scoliosis Repair and Surf Retreat” this December at PYC.