Prior to becoming a yoga teacher, I somehow imagined my yoga teachers as ‘better’ human beings. They seemed so full of light, so healthy, glowing: an ideal I wanted to attain. They didn’t deal with the issues of normal humans, right?

I went to my Yoga Teacher Training in Pavones with the same idea—I was ready to become enlightened. This meant I would be celibate and sober for a month (because enlightenment doesn’t include earthly pleasures); All I needed was a good month doing yoga and clearing my system, and I would be there, in the world of no-problems, no-cravings, maybe even glowing in some white flowy clothes.

A week into our YTT, and I was already faced with a dilemma. A majority of students chose to go explore the local cantina—a small, open air bar. We had been studying 8+ hours of yoga a day for a week—people were ready to spend a calm night out winding down a bit. I went, and stubbornly, refused to have a drink. I had an awful time, and was a bit of a sour-puss to be around. But this was enlightenment, yes?

Well, this brings us to week two, and I decided ‘enlightenment’ wasn’t all it was cracked up to be. I was picked up by a friend I had met in town, adventured away on an ATV to watch the sunset on a gorgeous beach, and *gasp* enjoy a single fruity beverage. I knew I would have to go to our nightly practice, but it was usually a very slow, restorative practice. No biggie. I returned back to the studio feeling the alive. I felt I had made the right decision—life was meant to be enjoyed! Carpe Diem!

But as karma would have it, this one and only night, we had an ass-kicking practice—to this day one of the best yoga classes I have ever been to. Indira began taking us into the story of Vasistha & Vishvamitra, two sages in Hindu mythology, while simultaneously working our bodies deep into the poses that represent them. 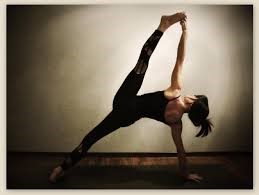 As the myth goes, Vasistha (of Vashisthasana, side plank) had already attained enlightenment, and was enjoying the benefits of it, including a magic cow, Nadini. Vishvamitra, was questing for the same enlightenment, but instead, got distracted by his greed for Vasistha’s magic cow. This led to him killing a 100 of his own sons in a war against Vasistha. This dude really messed up.

As I stood in our first Tadanasana, knowing that I had tasted of the forbidden fruit, I felt the same way. I had really messed up. Immense guilt and shame arose to heat my face. Even now, two years later, I get a sinking feeling in my belly as I write this. As Indira continued the story, even the mythology seemed to be a slap in the face—How had I allowed myself to be distracted from my path? How could I have sacrificed all of the tapas (fiery determination and discipline) I had put into my practice—the hours of meditation, study of books, and practice in postures. I had been training for years for this very moment. I prided myself on my determination—I practiced the first few days of YTT with a raging fever and strep throat that was to only be cured by antibiotics smuggled in from Panama. And yet a single coconut infused beverage was my downfall. Even though I had felt golden an hour prior, I now questioned how I could have let go of my tapas so easily.

I poured every bit of focus and concentration into practice that night—I ended class feeling emotionally and physically raw, having been stretched in every way. I gave of myself fully, with as much integrity as I could muster, and returned to my room in silence.

In tears, I found my journal, and tore out a page to ask the following question:

How do we balance being authentic seekers of light while living within the social realities of the western world? How do we have tapas, and still experience joy and delight without guilt and shame, without letting them become magic cow?

I felt truly authentic in my desire to find self-realization—I had been ready to practice austerity and be a pure, clean being. But honestly, in many ways, I think ‘enlightenment’ itself was serving as a magic cow—my grasping and yearning for some sort of ungrounded, idyllic existence was distracting myself from actually living the life I wanted to lead– one of adventure and spirit.

I came to yoga because I felt empty, and yoga made me feel full. I travelled the world for years hungering for something more—and still the closest I ever got to touching this void has been right on my mat, in the last minutes of savasana. Despite this, we live in a world of jobs and bills, and dating, and school, and families. If enlightenment looks like doing 7 hours of yoga and meditation every day, there are very few people who will ever really get there.

So how do we not give up on the path, when it seems like everything comes in the way. How do we be ‘yogis’ in the western world? How do we allow ‘yogi’ to mean something other than spandex pants and a great workout, and at the same time not get too caught up in our own idealized graspings?

While I am don’t have the answers to this questions, when I left PYC’s YTT ceremony, Instructor Chris Crotty’s said a few last words to me that I have carried with me on my own journey. Fittingly, these will be my last words to you. I offer them, recognizing that we will all, at some point, be taken by magic cows– We will get distracted and kill one hundred of the selves within us. This is the journey. But like Vishvamitra, we will find our way back. And this is the beauty. As Chris shared:

If you’re on the right path, just one more step.

I write this as my last (official) blog for the Pavones Yoga Center, and without getting too sappy, I want to say thank you to those who listened. To those who have witnessed me and my journey. While enlightenment still eludes me, I am finding my path, taking steps in (mostly!) I hope, the right direction.I offer eternal gratitude, to Indira, Chris, and all the yogis of the July 2012 training, for walking with me.

One thought on “Yoga in the Realities of the Western World”